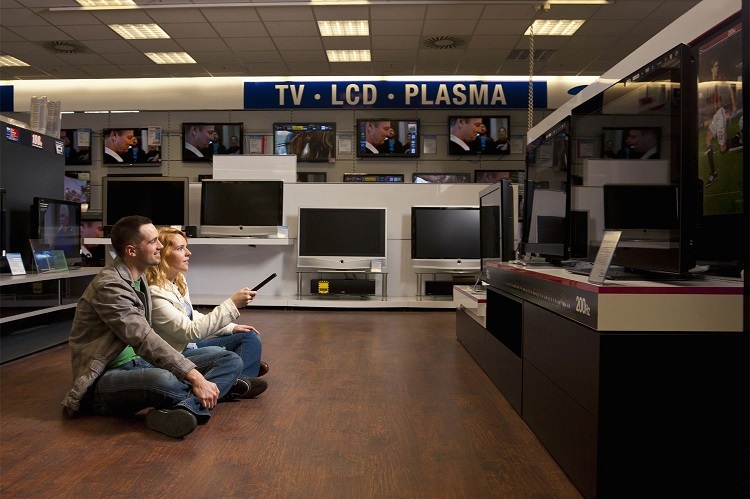 Although we could find some good quality CRT TV sets in the market, they are getting obsolete and in many countries, it is no longer possible to find them, because they are no longer produced. In this case, our options are typically LCD and Plasma TV sets. There’s one obvious advantage of using these TV models and one of them is that they take up much smaller space. They are much thinner than CRT TVs and they also produce less heat, because they don’t have tubes that typically consume much more electricity. Many of us appreciate the compactness of these TV sets and it is particularly true when we have limited space in our house. Before choosing between these TV models, we should better understand about their differences. Plasma TVs have more than a million of very small glass cells that have a mixture of xenon and neon gasses. When these cells are electrically charged, they emit an invisible UV light that strikes a phosphor panel. This will produce a variety of colors, including red, green, blue and many combinations of them.

In general, each cell in plasma TVs will represent individual pixel that forms different objects. The more cells we have, the higher resolutions we will get. On the other hand, LCD has a different kind of technology and it is actually a liquid that’s suspended between a couple of transparent panels. These panels are activated by electrical current and it can reposition itself. This will allow the liquid to let the light to get blocked or passed. This is the same with turning off or on millions of bulbs. The fluorescent tubes positioned behind the panels would provide the light source. In this case, each unlit and lit crystal should create visible pixels that can be composed on the screen display. However, many independent reviewers may think that LCD and plasma TVs seem to have different characteristics. For example, LCD display seems to offer more contrast and brighter. On the other hand, plasma TVs offer superior viewing angles, high definition color and much better contrast. Plasma TV is also more appropriate for gaming console because they offer faster response time, resulting in flawless gaming experience.

However, it should be noted that plasma TV sets usually use more power than LCD TV sets. But, it should be appropriate for people who seek theatre-like experience. When choosing between plasma and LCD TV sets, we should consider their accessories, such as remote controls. Remote controls for our TV set should be very easy to use and allow us to control most, if not all the features and functions. Many TV sets don’t have comprehensive remote controls and users are expected to work with the panels somewhere on the TC sets. Some large plasma and LCD TV sets allow us to enable POP or picture outside picture and PIP or picture in picture. This would be a good feature, because we could look at two different channels simultaneously on the large screen.

Affiliate marketing 2020 in a nutshell

Tips to hire the best digital marketing agency in the industry

Bring Your Presentations To The Next Level With Heatmaps

Dance Workout Apps For a Fitter You!